Located within the baroque church of Oliveira do Hospital, the chapel of “Capela dos Ferreiros” is one of the most important Portuguese gothic funerary spaces, both for the work that it embraces, as for it being, one of the rarest medieval sepulchral chapels of private initiative, that has survived until today in national territory.

It’s construction is due to Domingos Joanes, a nobleman of obscure ancestry, grandson of D. Chavão, who he buried alongside D. Domingas Sabachais, his wife, a poorly documented figure of our medieval history.

Authorship, Master Pero, the set contains an altarpiece and an image of the Virgin with the child, two tombs and a statue of a Medieval Knight, as a set of central importance in addressing this sculptor productions, probably of aragonese origin, that played a decisive role in the renewal of the portuguese sculpture. Through him, the national gothic sculpture “attained legal majority”. According to an inscription (now missing), in the outer wall of the Chapel, Master Pero, would have completed the construction of Capela dos Ferreiros in the year of 1341.

ALTARPIECE AND LADY WITH THE CHILD

The altarpiece, in polychrome limestone displays the base with glazed Hispanic-arabic tiles on it’s edges (Sevillian production) and a granite table. It integrates five embossed images bounded laterally by two buttresses (complemented by pinnacles). On top, a broken arch. In the centre, a flat-bottom stands out the Virgin Mary and child, flanked by the sun and the moon, and, images of the donors in prayer and two incensing angels. In the fifteenth century, identifying images were introduced, praising the greatness of the Lord.

Above the altar-piece, in a large scale, and in polychrome limestone lies a statue of the Virgin with the child (due to the repeated theme, it is presumed, to have been a carved corbel on the wall of another chapel.) Master Pero, uses similar composition principles as those used in countless images of the Virgin, crowned and standing, holding the child with the left hand and a flower on the right. The size of the head is subtly emphasized and the body is covered with a long tunic. It represents a very slight amendment suggesting an S shape which confers to it a very dynamic and particular piece.

Unlike other similar works by Master Pero, the funerary chests of Oliveira do Hospital, are in granite and have smooth surfaces, (the carving of granite is particularly difficult), it was an option, due to the inability to transport the appropriate dimensions of limestone blocks. The covers and respective carvings are in limestone of Portunhos, revealing a remarkable modeling. The underlying of Domingos Joanes, reveals him with long beard and wearing long robes; his right hand hold gloves; whilst his left, a sheathed sword. His head, flanked by an angel and a heraldic shield, is supported on a cushion, at his feet, the sculpture represents a hunting dog of the 14th. Century.

The same happens to the statue of his wife, only, in this case, the dog has smaller dimensions. Hands on her belly, Domingas Sabachais, was portrayed as a great Lady of her era, wearing a long clothed mantle dropping to her feet. Her hand, covered by a veil, was supported by a thick cushion. Her delicate and serene expression remember the image of the Virgin produced in the workshop of Master Pero.

The highlight goes to the Medieval Knight, or to the knight Domingos Joanes, there are two specimens, unknown is which one is the original or the copy, in limestone, where the early polychromic has faded, 72 x 19,5 x 64,8 cm. Shows a knight with a lowered helmet, armed with multiple weapons, solid armor, a shield, spurs, sword on shield shealth, riding a harnessed horse, simultaneously for parade or for combat. 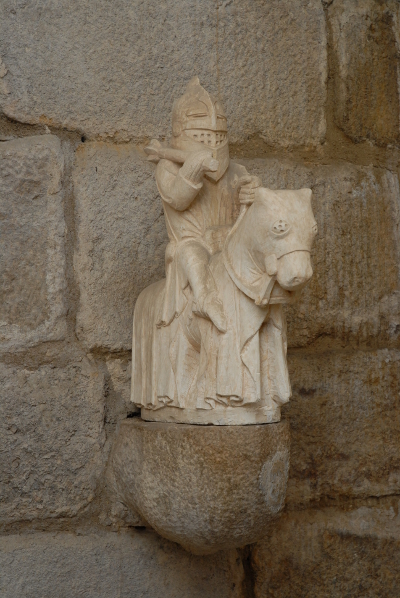 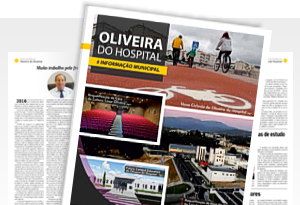